He received his Bachelor’s diploma at the Conservatory G. Martucci of Salerno and later a master’s degree with maximum votes and distinction at the renowned Conservatory of Santa Cecilia (Rome, Italy).

Since he was nine years old, he has been performing publicly in recitals and with orchestra both in Italy and abroad, gaining acclaim from both audience and critics. He appeared in important music festivals and concert series such as “International Festival of European Conservatories” Montepulciano, (Italy), “Maggio della Musica” Naples (Italy), “Concerti a villa Guariglia” Vietri sul ma
The Harriett Coleman Center for the Arts is located on the Lake Highland Preparatory School's main campus in downtown Orlando. For more information about our location, please follow this link: Address and Campus Map
Face coverings optional.

Online sales close 30 minutes after start of event.
Select an option below.
Donate without ticket purchase? 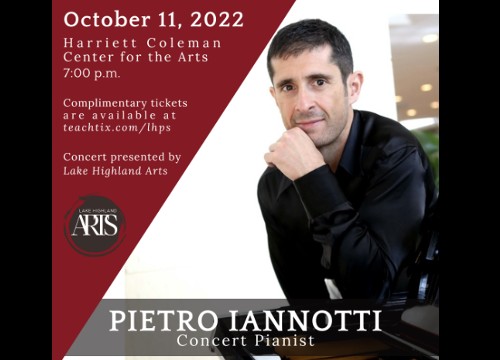