TEACHTIX
Buy Tickets
Sell Tickets & Stream
Contact Us
Buy Tickets Sell Tickets & Stream Contact Us
Timber Creek High School
The Comedy of Errors
Followed by The 2021 District Individual Events Showcase
The Comedy of Errors tells the story of two sets of twins, separated shortly after birth. Through coincidence the two pairs find themselves in the same city, and repeatedly get mistaken for each other. This play contains multiple examples of comedic violence and mild language. Following the performance of The Comedy of Errors, a select group of students will perform their individual events that will be adjudicated at the District 5 Thespian Festival.
Face coverings must be worn at all times.
Online sales remain open after the start of the event.
Select an option below.
Thursday, Nov 11, 7:00 PM EST
Timber Creek High Auditorium
Assigned Seating
Event date has concluded. 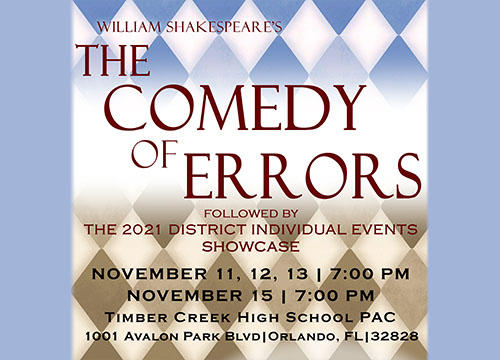