TEACHTIX
Buy Tickets
Sell Tickets & Stream
Contact Us
Buy Tickets Sell Tickets & Stream Contact Us
Theatre South Playhouse
The Lighting Thief, The Percy Jackson Musical
The Lightning Thief: The Percy Jackson Musical is the "thoroughly endearing family-friendly musical" (Charles Isherwood, Broadway News) with "one foot in Harry Potter and another in Dear Evan Hansen" (Chicago Tribune) this "winning adaptation" (Hollywood Reporter) of Rick Riordan's bestselling Disney-Hyperion novel is "compelling for fans and new audiences alike!" (TheaterMania) Charles Isherwood raved that "The Lightning Thief could be called Hadestown for kids!" (Broadway News). As a son of Poseidon, Percy Jackson has newly discovered powers he can't control, monsters on his trail, and is on a quest to find Zeus' lightning bolt to prevent a war between the Greek gods. Featuring a thrilling original rock score, The Lightning Thief: The Percy Jackson Musical has fans of all ages "cheering like the ball is being dropped on New Year's Eve!" (New York Magazine) After all, in this "action-packed, mythical adventure," (City Dads Group) "Percy Jackson is a rock star!" (NY Daily News)".

Join us for one weekend only of the Central Florida Premiere of "The Lightning Thief" on June 24th- 27th at 7:30pm. Enjoy a night our under the stars at The Theatre South ShowTent!
This is an outdoor venue. Bring your own chairs for under the tent - seating is not provided. Seating location under the tent is on a first come, first serve basis starting at 7pm. Concessions are available to purchase in advance or on-site at https://form.jotform.com/203145417758155. **Masks must be worn when using our facilities and at The Box Office/Concession table, but may be taken off once you are seated.
Online sales remain open after the start of the event.
Select an option below.
Thursday, Jun 24, 7:30 PM EDT
Theatre South Playhouse - TSP SHOWTENT
General Admission 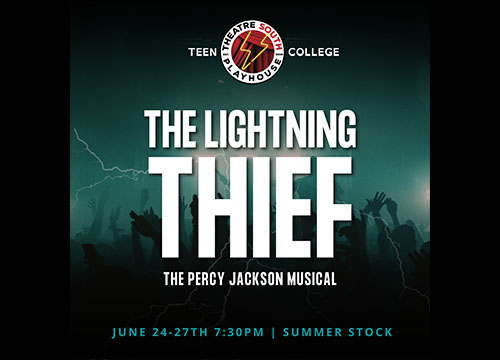